“If music be the food of love, play on”–Shakespeare

Woke up hearing a beautiful tenor voice singing this song.

“When evening falls so hard, I will comfort you…..When darkness comes, and pain is all around, Like a bridge over troubled water, I will ease your mind….”

“Sail on, silver girl, sail on by. Your time has come to shine….”

Make art inspired by the last song you heard. Or about bridges. Or about being there for someone.

Make art about the music makers.

Make art about the beauty of our diversity.

Was asked by another young person to teach him about cooking and food preservation. Blows up my heart to pass the old wisdom on ❤

Woke up hearing music this morning, a tenor singing down the hall, song woven through the fabric of my waking air

Make art about who you hear singing in the distance.

Thanks and Love to that fabulous poet-sister Amy Tudor for posting the article that inspires today’s prompt.

“Adults in America don’t sing communally. Children routinely sing together in their schools and activities, and even infants have sing-alongs galore to attend. But past the age of majority, at grown-up commemorations, celebrations, and gatherings, this most essential human yawp of feeling—of marking, with a grace note, that we are together in this place at this time—usually goes missing.”

How Communal Singing Disappeared From American Life: And Why We Should Bring It Back

Make art about singing with others, about that joining of voices.

Daily Prompt Love <3 In the Distance

Make art inspired by this line.

“In the distance someone is singing.”-Neruda

My late husband John Little Bear Eaton loved Stevens, especially this poem. When I read it now, I still hear his beautiful voice reciting it, that deep Georgia drawl.

The Idea of Order at Key West

She sang beyond the genius of the sea.
The water never formed to mind or voice,
Like a body wholly body, fluttering
Its empty sleeves; and yet its mimic motion
Made constant cry, caused constantly a cry,
That was not ours although we understood,
Inhuman, of the veritable ocean.
The sea was not a mask. No more was she.
The song and water were not medleyed sound
Even if what she sang was what she heard,
Since what she sang was uttered word by word.
It may be that in all her phrases stirred
The grinding water and the gasping wind;
But it was she and not the sea we heard.
For she was the maker of the song she sang.
The ever-hooded, tragic-gestured sea
Was merely a place by which she walked to sing.
Whose spirit is this? we said, because we knew
It was the spirit that we sought and knew
That we should ask this often as she sang.
If it was only the dark voice of the sea
That rose, or even colored by many waves;
If it was only the outer voice of sky
And cloud, of the sunken coral water-walled,
However clear, it would have been deep air,
The heaving speech of air, a summer sound
Repeated in a summer without end
And sound alone. But it was more than that,
More even than her voice, and ours, among
The meaningless plungings of water and the wind,
Theatrical distances, bronze shadows heaped
On high horizons, mountainous atmospheres
Of sky and sea.
It was her voice that made
The sky acutest at its vanishing.
She measured to the hour its solitude.
She was the single artificer of the world
In which she sang. And when she sang, the sea,
Whatever self it had, became the self
That was her song, for she was the maker. Then we,
As we beheld her striding there alone,
Knew that there never was a world for her
Except the one she sang and, singing, made.
Ramon Fernandez, tell me, if you know,
Why, when the singing ended and we turned
Toward the town, tell why the glassy lights,
The lights in the fishing boats at anchor there,
As the night descended, tilting in the air,
Mastered the night and portioned out the sea,
Fixing emblazoned zones and fiery poles,
Arranging, deepening, enchanting night.
Oh! Blessed rage for order, pale Ramon,
The maker’s rage to order words of the sea,
Words of the fragrant portals, dimly-starred,
And of ourselves and of our origins,
In ghostlier demarcations, keener sounds.
Make art about being the maker of your own song. 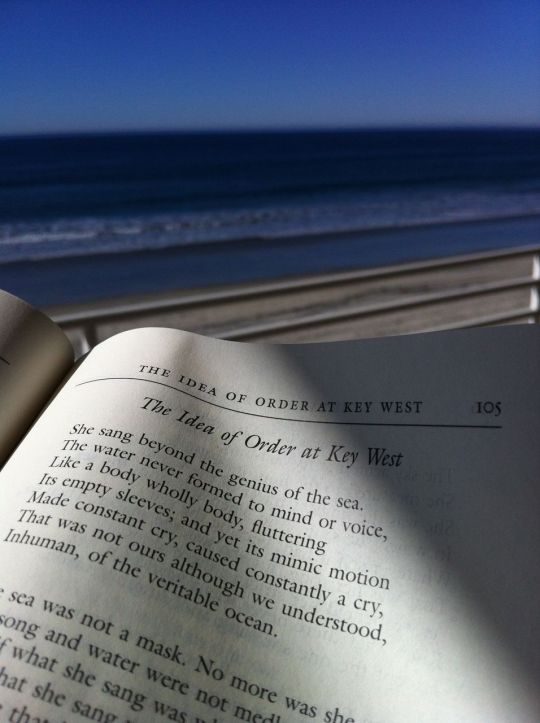 Cold may lie the day,
And bare of grace;
At night I slip away
To the Singing Place.
A border of mist and doubt
Before the gate,
And the Dancing Stars grow still
As hushed I wait.
Then faint and far away
I catch the beat
In broken rhythm and rhyme
Of joyous feet,—
Lifting waves of sound
That will rise and swell
(If the prying eyes of thought
Break not the spell),
Rise and swell and retreat
And fall and flee,
As over the edge of sleep
They beckon me.
And I wait as the seaweed waits
For the lifting tide;
To ask would be to awake,—
To be denied.
I cloud my eyes in the mist
That veils the hem,—
And then with a rush I am past,-—
I am Theirs, and of Them!
And the pulsing chant swells up
To touch the sky,
And the song is joy, is life,
And the song am I!
The thunderous music peals
Around, o’erhead-
The dead would awake to hear
If there were dead;
But the life of the throbbing Sun
Is in the song,
And we weave the world anew,
And the Singing Throng
Fill every corner of space—-
Over the edge of sleep
I bring but a trace
Of the chants that pulse and sweep
In the Singing Place.
Make art about your singing place.