Author of The Real Politics of Lipstick, If We Could Know Our Bones, and The Night I Heard Everything

Mary Carroll-Hackett’s work is alive with the language of the heart.

It is angry, sad, celebratory,

~Robert Bausch, author of Far As the Eye Can See,  Almighty Me (optioned for film and eventually adapted as Bruce Almighty), A Hole in the Earth (a New York Times Notable and Washington Post Favorite Book of the Year), and Out of  Season.

The Night I Heard Everything

“Mary Carroll-Hackett knows what love means, both for body and soul. She knows about the riches of listening as well as the rewards of watching. For her, looking, listening, and remembering are forms of prayer. With an intense focus on language that is sharp, precise, and rhythmic—she reminds us…”~Peter Makuck

Thanks and love to Editor Diane Kistner and all the beautiful folks at FutureCycle Press.

If We Could Know Our Bones

“These prose poems offer us shelter and meaning in the everyday, yet reach out to brush the hair back out of the face of the immortal as if to say, “God, let me see your eyes.” Intimate and strange they occupy a place thumping within the physical human heart and the other heart we cannot fathom.”~ Jerry D. Mathes II

Thanks and love to Editors Nicolette Wong, Walter Bjorkman, and all the beautiful folks at A-Minor Press.

The Real Politics of Lipstick

“This work is unlike any other, in its range of rich, conjuring imagery and its dexterity, its smart voice. Carroll-Hackett doesn’t spare us—but doesn’t save us—she draws a blueprint of power and class with her unflinching pivot: matter-of-fact and tender.” —Jan Beatty

Thanks and love to Editor Dan Sicoli and all the beautiful folks at Slipstream. 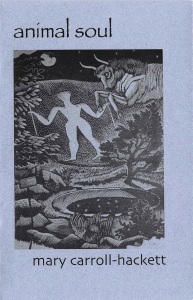 “In her new collection, Animal Soul, Mary Carroll-Hackett does not just give us “the colon before the list of truest things.” She begins that list for us, with poems like “Galileo’s Fingers,” “Six Rules For Devils,” and “This Bread, Those Beans.” ~Sammy Greenspan

Thanks and love to all the beautiful folks at Kattywompus.

Mary Carroll-Hackett earned Bachelor’s degrees in Philosophy and Anthropology and a Master’s of Arts in English/Creative Writing from East Carolina University, then went on to earn an MFA in Literature and Writing from Bennington College. Her poetry and fiction have appeared in more than a hundred journals including Carolina Quarterly, Clackamas Literary Review, Pedestal Magazine, The Potomac, Reed, Superstition Review, Drunken Boat and The Prose-Poem Project, among others.

Her awards include being named a North Carolina Blumenthal Writer and winner of the Willamette Award for Fiction. Her scripts have won or placed in numerous competitions, including Best Screenplay at Moondance, the Great Lakes Film Festival, Beaufort Film Festival, American Gem, Gimme Credit, the Page Awards, and Wildsound. The National Center for Film in Toronto staged a reading of her script OBX in 2008. She had an O Henry Recommended recognition for her story “Placing.”

Her first chapbook, Three, was released in 2004, and her first collection of stories, What the Potter Said, in July 2005. The Real Politics of Lipstick was named winner of the 2010 annual poetry competition by Slipstream. A chapbook,  Animal Soul, was released in 2012 from Kattywompus Press, and a full-length collection, If We Could Know Our Bones, by A-Minor Press in January 2014.  Another full collection is forthcoming in April 2015, The Night I Heard Everything, from FutureCycle Press, as well as a chapbook, Trailer Park Oracle, from Aldrich Press in November 2015.

Mary founded and for ten years edited The Dos Passos Review, Briery Creek Press, and The Liam Rector First Book Prize for Poetry. She also co-founded and launched SPACES, an innovative online magazine of art and literature, featuring videos of writers reading. Mary regularly teaches workshops and seminars on Writing Through the Chakras, Writing the Spiritual Life, Writing the Body, and Writing the Mother, Mothering the Writer.

She has taught writing for nearly twenty years, and in 2003, founded the Creative Writing programs, undergraduate and graduate, at Longwood University in Farmville, VA, serving as Program Director of those programs until Fall 2011.  Most recently, she joined the low-residency faculty for the MFA program at West Virginia Wesleyan.

Mary is currently at work on a memoir.