Monday Must Read! Raised by Humans by Deborah Miranda

An enrolled member of the Ohlone-Costanoan Esselen Nation of California, poet Deborah Miranda was born in Los Angeles to an Esselen/Chumash father and a mother of French ancestry. She grew up in Washington State, earning a BS in teaching moderate special-needs children from Wheelock College in 1983 and an MA and PhD in English from the University of Washington. Miranda’s collections of poetry include Raised by Humans (2015); Indian Cartography: Poems (1999), winner of the Diane Decorah Memorial First Book Award from the Native Writers’ Circle of the Americas; and The Zen of La Llorona (2005), nominated for a Lambda Literary Award. Miranda also received the 2000 Writer of the Year Award for Poetry from the Wordcraft Circle of Native Writers and Storytellers. Her mixed-genre collection Bad Indians: A Tribal Memoir (2013) won a Gold Medal from the Independent Publisher’s Association and the PEN Oakland Josephine Miles Literary Award, and was shortlisted for the William Saroyan Award. She teaches at Washington & Lee. 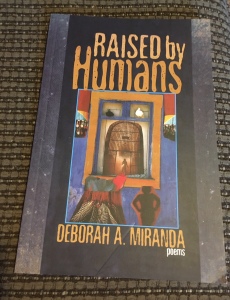 “The poems in Raised by Humans are about surviving childhood and colonization. Childhood did not agree with Deborah Miran­da, mostly because the adult humans in charge of her life were not prepared to manage their own lives, let alone the life of a human-in-training. Humans raised Deborah, but it wasn’t a hu­mane childhood.

This poetry collection is also about how indigenous people survive civilization and become readers and writers of the same alphabet that colonized their culture. The complexity of being forced to find her way into relationship with the very people or cultures that have hurt/raised Miranda is a paradox at the heart of her poetry, which pushes language past what Miranda calls the “alphabet of walls.”

Monday Must Read! Before Language by Susan Deer Cloud

Susan Deer Cloud, a mixed lineage Catskill Indian, is an alumna of Goddard College (MFA) and Binghamton University (B.A. and M.A.). She has taught Creative Writing, Rhetoric and Literature at Binghamton University and Broome Community College. A few years ago she returned to her “heart country” Catskills to dwell once more with foxes, deer, black bears, bald eagles, and the ghosts of panthers and ancestors. She now lives as a full-time mountain woman, dreamer and writer. Deer Cloud is the recipient of various awards and fellowships, including an Elizabeth George Foundation Grant, a National Endowment for the Arts Literature Fellowship, two New York State Foundation for the Arts Fellowships, and a Chenango County Council for the Arts Individual Artist’s Grant. Some of her books are Hunger Moon (Shabda Press); Fox Mountain, The Last Ceremony and Car Stealer (FootHills Publishing); and Braiding Starlight (Split Oak Press). Her poems, stories and essays have been published in anthologies and journals too numerous to name. In order to get out “the voices of the voiceless,” the poet has edited three published anthologies: multicultural Confluence and Native American anthologies I Was Indian (Before Being Indian Was Cool), Volumes I & II; the 2008 Spring Issue of Yellow Medicine Review, a Journal of Indigenous Literature, Art & Thought; and the Re-Matriation Chapbook Series of Indigenous Poetry. She is a member of the international peace organization SERVAS; Poets & Writers; Associated Writing Programs (AWP); and indigenous Wordcraft Circle. She has served on panels at writers’ conferences and given myriad poetry readings at colleges, cultural centers, coffee houses, and other venues. In between her sojourns in the Catskills, Deer Cloud has spent the past few years roving with her life’s companion, John Gunther, around Turtle Island (North America) as well as on the Isles (Iceland, Ireland, Scotland, Wales and England) and Europe