Michael Meyerhofer‘s fifth book of poems, Ragged Eden, is available from Glass Lyre Press. He has been the recipient of the James Wright Poetry Award, the Liam Rector First Book Award, the Brick Road Poetry Book Prize, and other honors. For more information and an embarrassing childhood photo, visit troublewithhammers.com. 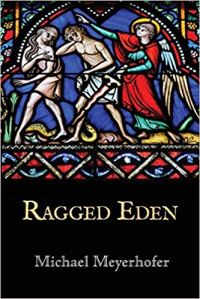 “In these brilliant poems, Michael Meyerhofer explores the complex and crazy world you and I wake up to every day. He writes about superheroes and poverty and death and Carl Jung and parallel universes and dictators and what you can see and hear while sitting in a bar where they’re mourning a dead woman named Lynette. And what makes all of these things jump up and shout is Meyerhofer’s love and curiosity. He’s the poet who wants his eyeballs to always be open, always take in and hug the things most of us are too busy looking for the next Starbucks to see.”—John Guzlowski, author of Echoes of Tattered Tongues

Michael’s also a fabulous fantasy novelist! His first fantasy novel, Wytchfire (Book I in the Dragonkin Trilogy) was published by Red Adept Publishing. The book went on to win the Whirling Prize from the Kellogg Writers Series, and was nominated for a 2015 Readers’ Choice Award in fantasy by the premier book review website, Big Al’s Books & Pals, and was also an Honorable Mention for the Readers’ Favorite Award. The sequels, Knightswrath and Kingsteel, are out now and the entire trilogy is also available in audio format and omnibus. There’s also a second series, the Godsfall Trilogy, set in the same world. The third volume, The Undergod, is available now!