Monday Must Read! The Selfless Bliss of the Body by Gayle Brandeis 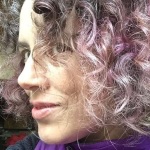 Gayle Brandeis grew up in the Chicago area and has been writing poems and stories since she was four years old. She is the author of Fruitflesh: Seeds of Inspiration for Women Who Write (HarperOne), Dictionary Poems (Pudding House Publications), the novels The Book of Dead Birds (HarperCollins), which won Barbara Kingsolver’s Bellwether Prize for Fiction of Social Engagement, Self Storage (Ballantine) and Delta Girls (Ballantine), and her first novel for young readers, My Life with the Lincolns (Holt), which won a Silver Nautilus Book Award and was chosen as a state-wide read in Wisconsin. She released The Book of Live Wires, the sequel to The Book of Dead Birds, as an e-book in 2011. 2017 brings the release of two new books: in June, a collection of poetry, The Selfless Bliss of the Body (Finishing Line Press) and in November, a memoir, The Art of Misdiagnosis: Surviving My Mother’s Suicide (Beacon Press.)

Gayle’s poetry, fiction and essays have appeared in numerous magazines and anthologies (such as Salon, The Rumpus, The Nation, and The Mississippi Review) and have received several awards, including the QPB/Story Magazine Short Story Award, a Barbara Mandigo Kelley Peace Poetry Award, a grant from the Barbara Deming Memorial Fund, and a Notable Essay in Best American Essays 2016. Her essay on the meaning of liberty was one of three included in the Statue of Liberty’s Centennial time capsule in 1986, when she was 18. In 2004, the Writer Magazine honored Gayle with a Writer Who Makes a Difference Award.

Gayle currently teaches in the low residency MFA programs at Antioch University Los Angeles and Sierra Nevada College, where she was named Distinguished Visiting Professor/Writer in Residence 2014-2015. She served as Inlandia Literary Laureate from 2012-2014, acting as literary ambassador to and for the Inland Empire region of Southern California. During her tenure, she worked extensively with the community, including at-risk youth, and edited the anthology ORANGELANDIA: The Literature of Inland Citrus. Gayle is currently editor in chief of Tiferet Journal and founding editor of Lady/Liberty/Lit. She is also mom to kids born in 1990, 1993 and 2009.

Praise for The Selfless Bliss of the Body

“My whole body arcing / to face itself..” Brandeis, the “Chagall woman” writes at the beginning of this volume. Yes, it is quite a feat to face the translucent and filmy, vibrating and silent flux of being and “almost-not-being.” For this reason alone, we must rise and applaud. Gayle offers us a rarely seen contemporary woman-metaphysics — a liquid diamond made of light areoles and auras, a floating naked body of “surrender,” of “danger zones,” of self-silhouettes — a “pulse of pure movement.” These undulations of perception, eros, and constant questioning, body-life and social investigations of the continuous blur of woman-existence is key to all of our ongoing world chatter. Perhaps, with this book, this almost-self-magic collection, all of us can notice what it takes to inscribe and see our hardened rushing lives as truly meaningful, even though they come and go, as we peer at them. A monumental achievement.–Juan Felipe Herrera, Poet Laureate of the United States

The Art of Misdiagnosis Book Trailer

The Book of Live Wires Part 1

The Book of Live Wires Part 2