Her first novel, Moon Women, was a Southeastern Booksellers Association (now Southern Independent Booksellers Alliance) Award Finalist, and her second novel, Plant Life, won the 2003 Sir Walter Raleigh Award for Fiction. She is the recipient of the 2007 James Still Award for Writing about the Appalachian South, awarded by the Fellowship of Southern Writers. Her third novel, The Big Beautiful, was published in March 2007. An excerpt from Pam’s current novel-in-progress, The Wilder Place, can be heard here: http://www.pameladuncan.com/the_wilder_place__a_novel_in_progress__80970.htm

One of my favorite journals!

TWO HAWKS QUARTERLY is an online journal affiliated with Antioch University Los Angeles’s BA program in creative writing and is setting the bar for contemporary literature with bold and illuminating poetry, fiction, CNF, and experimental work.

Daily Prompt Love! <3 Cooking and What Woke You :-)

Spent all day canning and preserving food. Always takes me back into the company of all those over time who did this before me, especially the women who taught me, as a child, to can and put up food for the winter.

Make art about food as heritage.

Was abruptly awakened by a crow at the window, informing me—loudly–that the suet cages needed filling 🙂

Make art about being awakened suddenly.

Woke up hearing this song. One of my favorites.

Make art about where God is. Or about casting out a line into the darkness.

So Excited! Readings Scheduled for Fall 2016!

And BIG GRATITUDE to the fabulous generous editors who made these crazy lil books possible–Karen Kelsay Davies with Kelsay Books and Diane Kistner and Robert S. King with FutureCycle Press

“We are dedicating the Winter 2017 issue of New Madrid to the theme of “Imagining Peace.” As George Bernard Shaw wrote, “Peace is not only better than war, but infinitely more arduous.” We are looking for work in all literary genres that speaks to this arduousness and that defines peace not just as the absence of war, but as something dynamic in its own right. Possible categories of interest include: writing by peace activists and refugees, testimonies about immigration or international crises, travel writing, translations, and much more. An in-depth explanation can be found on our website. We will be accepting submissions from August 15 through October 15, 2016.”
Visit their website: www.newmadridjournal.org

Time with my daughter, son-in-law, and that miraculous GrandPerson. Looking into my grandson’s eyes, I can see eternity ❤

Make art about what you see in a child’s eyes.

Love coming home to find tomatoes ripening to red, okra reaching fingers to the sky, even those last cucumbers still making their climb up the trellis 🙂

Deep within each one of us lies a garden.~Julie Moir Messervy

Make art about the garden that lies within you.

Had the chance today to spend time with my sister and a beautiful cousin I haven’t seen in years. So good for my heart!

Thinking on this today.

Make art about the power of belief.

Had a chance to see my sister and a beautiful cousin I haven’t seen in years yesterday, so we’re a day late, but I promise this writer is worth the wait! 🙂

This week meet Jerry D. Mathes II, author of Fever and Guts: A Symphony, Ahead of the Flaming Front (winner of the North American Book Award), The Journal West, Fall in the Borderland, and the forthcoming collection of short stories, Shipwrecks and Other Stories. Jerry is a Jack Kent Cooke alumnus and is also the author of Still Life: A Novella, winner of the Meadow Prize for the Novella. His photography, poems, essays, and short stories, have won numerous awards. In 2011, he produced a short film, “Drinking Sangria in the Cold War,” which was adapted from one of his award winning short stories. He has worked as a martial arts instructor, an armor crewman, a construction worker, hotel auditor, car salesman, repo-man, delivery guy, cable guy, went logging, worked in forestry, crewed on several types of fishing vessels, fought wildfire on a helicopter-rappel crew, taught writing at the University of Idaho and Stephen F. Austin State University and taught the Southernmost Writers Workshop in the World at Amundsen-Scott South Pole Station Antarctica during the 2009-2010 and 2011-2012 Austral summer seasons where he worked in logistics. He also wrote and directed two short films while at the South Pole. In 2012 he produced a video essay about wildfire. He loves his two daughters very much.

Pre-Order Shipwrecks and Other Stories!

Fever and Guts: A Symphony

Ahead of the Flaming Front

Fall in the Borderland

“Send us your lovely words! We are looking for poetry, creative nonfiction, fiction, translations, humor, political satire, flash fiction, flash creative nonfiction, memoir, cross-genre, photography, and artwork in most mediums. This journal does not accept genre such as romance, mystery, or sci-fi. However, we do accept dystopian fiction. We love to see the artistic skills and tackle box (syntax, diction, tone) of a writer always, and usually we enjoy writing for a social issue, because we know you have your opinions, too. We are escapists, but sometimes we want to be realists.”

Daily Prompt Love <3 Sometimes the Prompt is an Ice Cream Memory, or a Soft Sparkle in the Dark

Bought my great-nephew his own ice cream maker and together we made his first homemade ice cream. He declared it was “the best ever!”

Had a great conversation with Road Angel Casey, who left her job at Duke University to start a small organic farm, selling vegetables and flowers, nut butters and preserves from a roadside stand.

Make art about taking the risk to grow a dream. 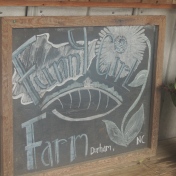 A woman at a gas station came running toward me, smiling and waving and yelling, “Donna! Donna! I haven’t seen you in so long!” I smiled, shaking my head, waiting for her to realize that I wasn’t Donna after all. As she reached me, her face fell, and she looked so embarraassed, and I said, “I’m sorry.” She laughed and said, “No, I’m sorry. I could’ve sworn–” She laughed. I said, “I’m Mary, but I bet you could find Donna, if you looked. Have you tried Facebook?” I told her about finding my friend Lynne again after many years, and how blessed we both felt. She said, “I haven’t looked for her, but I think I will.” She left smiling, and I finished pumping my gas, climbing back into my car, wishing, for just a second, I had been Donna, this friend who brought such a smile to the woman’s face.

Make art about mistaken identity. Or about finding that wonderful friend again.

Dreamt I was in a crowded park handing out sparklers. So many sparklers, so many people. Before too long, the park was shimmering with light and color.